Gay Discontent in the Age of Obama 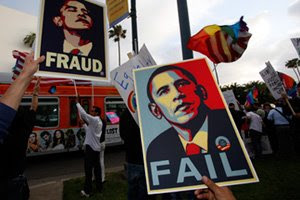 Like the vast majority of LGBT people in the U.S., I’m deeply disappointed and often angry at the failure of Barack Obama and his administration to make good on the president’s various election campaign promises concerning lesbian, gay, bisexual, and transgender (LGBT) rights, i.e., the full equality for LGBT people under the law.

Jonathan Capehart seeks to temper the LGBT community’s outrage in his op-ed in today’s Washington Post. Entitled “For Obama, a Hit and Miss on Gay Rights,” Capehart’s op-ed is reprinted in its entirety below.

For Obama, a Hit and Miss on Gay Rights 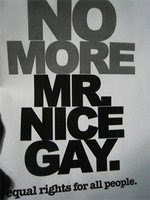 Let’s face it, the Obama administration bungled the politics surrounding its filing of a brief in a case challenging the Defense of Marriage Act (DOMA), which prohibits federal recognition of same-sex marriages. But the searing criticism that President Obama is getting for it borders on a blind rage that obscures some positive changes for gay men and lesbians from his administration in both style and substance.

Obama has only himself to blame for this. The first substantive comment on gay and lesbian equality since he took office was the Justice Department’s noxious brief in Arthur Smelt and Christopher Hammer v. United States of America, and it fueled suspicion that the president was backpedaling on his promises. It didn’t have to be that way. The department could have fulfilled its obligation to defend the nation’s laws without repeating ugly reasoning rooted in ignorance.

The Justice Department could have stopped with its sound argument that the case should be dismissed because the plaintiffs did not “claim to have plans to seek recognition of their . . . California marriage in another state” and they “do not suggest that they have applied for any federal benefits, much less been denied any at this point.” Thus, neither an “imminent injury” nor an “injury in fact” attributable to DOMA has been established. The plaintiffs lack standing. Case closed. That would have been fine with gay rights groups, which viewed Smelt-Hammer as an imperfect vehicle for challenging DOMA’s constitutionality. “We had no problem with DOJ getting rid of this case,” one legal expert told me. “The plaintiffs didn’t tell a good story.”

But Justice went further. It cited a 1961 case involving incest (a marriage of an uncle to a niece that was “valid in Italy under its laws”) to show that states were not bound to honor “certain marriages performed elsewhere.” But more galling (to me, anyway) was the twisted assertion that DOMA didn’t single out gays and lesbians for discrimination. “DOMA is rationally related to legitimate government interests and cannot fairly be described as ‘born of animosity toward the class of persons affected,’” the government argued – making a mockery of Obama’s repeated assertions that DOMA is discriminatory.

The reaction was swift, and the anger hasn’t subsided. Comments on the Web have ranged from disillusionment to disgust. More than a few fumed that the push for equality was being relegated to the back of the bus. And a big Democratic Party fundraiser featuring Vice President Biden scheduled for Thursday has been losing donors since the DOMA brief became public last weekend.

Frustration with the brief and with the administration’s inaction so far on big issues such as overturning DOMA and the ban on gays serving openly in the military is understandable. Making Obama out to be a sworn enemy of gay and lesbian civil rights is not. On Wednesday, he signed a memorandum extending a number of benefits to the partners of gay federal employees. This was the culmination of work that began in December. For the first time, not only did a sitting president utter the acronym “LGBT,” for lesbian, gay, bisexual and transgender, but it was also the first-ever spoken recognition of transgender Americans by their president.

Obama directed all Cabinet secretaries and John Berry [right], director of the Office of Personnel Management and the highest-ranking openly gay person in the administration, to conduct a policy review within 90 days to determine where inequalities for same-sex partners could be eliminated under existing law. He threw his support behind the Domestic Partnership Benefits and Obligations Act, which would make all the benefits that straight couples get available to partners of gay federal employees. Obama acknowledged that his directive was “only one step.” He admitted that “among the steps we have not yet taken is to repeal the Defense of Marriage Act. I believe it's discriminatory . . . and we will work with Congress to overturn it.”

Under normal circumstances, all of this would have been big news in the push for gay and lesbian civil rights. Instead, it has been derided as too little, too late. As if any of this would have happened with Sen. John McCain (R-Ariz.) in the White House. I’m all for holding an ally’s feet to the fire. But to not recognize and celebrate victories, no matter how “small,” is maddeningly shortsighted in the long march to full equality.

If gays and lesbians want big victories, such as the repeal of DOMA and the “don't ask don’t tell” policy, they should focus their fire where it belongs: on Congress. Each bill will take 218 votes in the House and 60 in the Senate to reach the president’s desk, and the votes aren’t there yet. Saying no one is going to hand gay men and lesbians their rights, Berry told me, “We have to get out there and fight and get those votes.” That won’t be easy. But if last week’s announcement is a sign that Obama will be vocal, persistent and public in his support, the fight can be won.

I can wait for DOMA, but Don't Ask Don't Tell is costing the security of this country dearly. 58 Farsi speakers with intelligence ties since the beginning of the Iraq war is a huge hit in our intelligence capabilities. No wonder we have to use Huffington Post translators to try and figure out what's going on in Iran.

All that takes is one signature from our president on one Executive Order to hault this. Even if it only means until the end of his presidency it's better than forcing these valuable intelligence assets out of the military.

It would also send a real message to straights. Whether they like it or not, gay talent is a major asset for all Americans.

Capehart is an Administration apologist. What a sham of an analysis! The main reason Obama came forth with "benefits" for same-sex partners is that gays have started pulling their $$$ from the DNC coffers. Good! Results=Votes, Money, Volunteerism; No Results=None of the Above.

I agree with the guys who posted ahead of me, but I do know that re anything governmental, esp. at the federal level, things move slowly. Obama's main push right now is health care, if he fails he may be a one term president. Then we may get another GOPer in there, it's not out of the realm of the possible. DOMA needs to be repealed, DADT needs to go too. If something isn't done re both, esp. DADT, by the end of this year, then I think the gay community may indeed start pulling away from Obama. The problem is, however, other than the Dems, where do we go?