A Mother's Request to President Obama: Full Equality for My Gay Son

The Twin Cities GLBT Pride Festival takes place this weekend in Minneapolis - an appropriate time, I’m thinking, for a special “Gay Pride 2009” series of posts here at The Wild Reed. In this initial installment, I share my friend Randi Reitan’s open letter to President Obama, recently published on The Huffington Post.

I watched you preach on Father’s Day and my heart was touched by your words. I listened with a mother’s heart. I have been blessed with four dear children. Not a day goes by that I don’t thank God for the gift my children are to me.

You told the congregation that the family is the most important foundation. You said we must take responsibility for those we love and we must set an example of excellence for our children. We must give our children dreams without limits and we must teach them the importance of having empathy for others. We must teach them to stand in another’s shoes to know another’s pain and their challenges so we can lift them up.

You said when you were younger you thought life was all about yourself and now you realize life is about leaving this world a better place for our children.

Your words touched this mother’s heart but they also made me wonder if you are truly living your words.

My youngest child is gay. As parents we were ignorant about homosexuality when Jacob came out to us as a 16-year-old young man eleven years ago. We embraced him and we told him we loved him that night, but we were clueless about what it meant to be gay.

We had to educate ourselves. Another part of your message on Sunday addressed the importance of education. I ask you now to educate yourself about homosexuality.

When we visited with the medical community on our journey to understanding we learned that homosexuality was simply the sexual orientation our son was given. We learned it was not a choice that Jacob made. We were told it was a given for him and we as his parents should encourage him to embrace his orientation and live his life with dignity and respect.

This began a new chapter in our lives. We learned to live in the empathy you extolled. We met hundreds of young gay people who have had such difficult lives because of the ignorance of our society. We have listened to pastors condemning gays and teaching others to do the same. We have felt the pain of discrimination as our son has been harassed with words and attacks. We have listened to young people with tears in their eyes share that they have been rejected by their own parents. We have watched as our son tried to enlist as a gay man and was instead led away in handcuffs.

We also took responsibility as you asked parents to do on Sunday. We have spoken out, marched and led rallies. We have been arrested numerous times doing civil disobedience to try to bring the issues of injustice to light. We have poured our financial resources into programs and agencies that work to educate the people. We have lobbied at the Capitol in our state of Minnesota and in Washington, DC. We have written hundreds of letters to lawmakers, pastors, teachers, and now to you our President.

Our country needs your voice on this issue. I am impatient to see my dear son live his life with full equality. Can you imagine if one of your daughters had equality and the other did not? That is the reality for every family with a gay child. It is heartbreaking and it is wrong.

Your final lesson in your sermon was on the gift of faith and hope. You spoke of a hope that insists that something better is waiting for us. You spoke of your faith and your love of Jesus. The Jesus that I know would not make outcasts of God’s beloved children. The gay community has been made into outcasts by many in our churches. We need to hear from you that no one is less than another. The greatest commandment that Jesus taught was to love one another as He loves us.

You talked about the importance of fathers teaching their children. If you don’t address the issues of equality for the gay community, the discrimination will not end. Your daughters are watching you. They are learning from you and so are all the sons and daughters in this country.

You can be a president who not only embraces equality but who fights to see the day all God’s children actually live it. To be able to bring equality to a group of people should be seen as not only a duty of justice but an honor of the highest level. You must be the one to lead our country by setting an example of excellence in treating all Americans with equality in all areas of life.

I sat on the lawn in front of our nation’s Capitol on that cold day in January when you took the oath of office. My heart filled with hope that day because I believed the words you spoke as you campaigned. Those words seem hollow to me now.

I ask you with tears in my eyes, with pain in my heart, and with a mother’s enduring love for her dear children: please bring equality, true full equality, to my son and to all in the gay community. 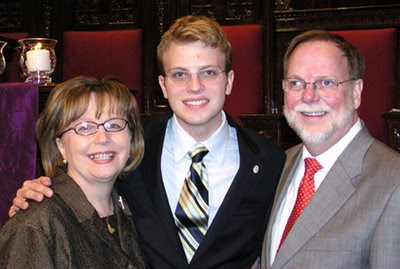 Randi and Phil Reitan with their youngest son Jacob – March 7, 2007.
To read an article by Jacob on marriage equality, click here.
For more of the Reitans at The Wild Reed, see here and here.

What a superb letter. God bless them.

Great letter from Randi. Thanks for reprinting it.