No Surprise, But an Important Event Nonetheless 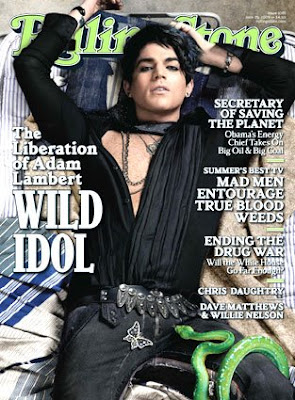 Glam rocker Adam Lambert Comes Out
Recently I shared excerpts from a commentary by Rob Sheffield on American Idol runner-up and flaming glam rocker Adam Lambert. If you recall, Sheffield offered the opinion that Lambert (or “Glambert,” as he calls him) represents a “new gay stereotype” within popular culture – that of the “hyperfunctional gay dude who has his shit together in contrast to all the neurotic, insecure straight guys around him.” Of course, such a contention assumes Lambert is actually gay – something that up until today he would neither confirm or deny.

Well, in the latest issue of Rolling Stone magazine, Lambert finally says what I think it’s safe to say everyone knew: “I’m gay!”

Yes, Hollywood’s worst kept secret has finally been acknowledged. Following are excerpts from an Associated Press article about Lambert’s coming out.

“I don’t think it should be a surprise for anyone to hear that I’m gay,” the “American Idol” runner-up says. “I’m proud of my sexuality,” continues the rocker, who was photographed holding hands with interior designer Drake LaBry earlier this month. “I embrace it. It’s just another part of me.”

But Lambert, 27, from San Diego – who performed Sam Cooke’s “A Change Is Gonna Come” on the “Idol” finale – says he’s not the poster boy for gay rights.

“I’m trying to be a singer, not a civil rights leader,” he tells “Rolling Stone” contributor Vanessa Grigoriadis.

Lambert admits that he was nervous about coming out while “Idol” was still on the air because contestants are under a media embargo, and he wanted to do it on his “own terms.” (He also says producers were open to him handling it however he wanted to.)

“I was worried that [coming out] would be so sensationalized that it would overshadow what I was there to do, which was sing,” Lambert tells the magazine. “I’m an entertainer, and who I am and what I do in my personal life is a separate thing. it shouldn’t matter. Except it does. It’s really confusing.”

Yeah, it can be - as can life in general. But that’s okay. The main thing is that you’re out – and have the wonderful opportunity now to live more completely a life of honesty and integrity. And the living of such a life contributes mightily to the advancement of “gay rights” - regardless of whether or not you see yourself as a “poster-boy.”

As you can see, I love a good “coming out” story! For one thing, I appreciate and enjoy reading about the positive impact that coming out has on a person. (Hey, it’s no accident that Rolling Stone titles its story: “The Liberation of Adam Lambert”!) I also get a kick out of knowing that every time a story like this is shared (whether person-to-person or blazing from the cover of a popular magazine) it’s inevitable that somewhere, somehow fallacies are being dispelled and walls of ignorance and prejudice are being inexorably demolished.


For other inspiring “coming out” stories and experiences, see the previous Wild Reed posts:
Out Gay Actor Neil Patrick Harris: “I’m Striving to Be an Example of Normalcy”
Darren Hayes, Coming Out . . . Oh, and Time Travel
Matthew Mitcham: Making a Splash
Openly Gay Diver Wins Olympic Gold
My Advent Prayer for the Church (includes actor Ian McKellen’s thoughts on his coming out experience)

See also:
Coming Out: An Act of Holiness
In the Footsteps of Spring – Part 4: Coming Out