.
Frank Rich on why all Americans should be disappointed
by President Obama’s inaction on gay civil rights 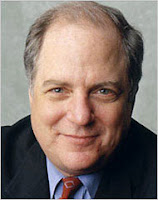 In this fifth installment of The Wild Reed’s special Gay Pride 2009 series, I share an excerpt from an op-ed written by Frank Rich (pictured at right) and published in yesterday’s New York Times.

. . . Full gay citizenship is far from complete. “There’s a perception in Washington that you can throw little bits of partial equality to gay people and that gay people will be satisfied with that,” said Dustin Lance Black, the screenwriter who won an Oscar for Milk, last year’s movie about Harvey Milk, the pioneering gay civil rights politician of the 1970s. Such “crumbs,” Black added, cannot substitute for “full and equal rights in all matters of civil law in all 50 states.”

As anger at White House missteps boiled over this month, the president abruptly staged a ceremony to offer some crumbs. The pretext was the signing of an executive memorandum bestowing benefits to the domestic partners of federal employees. But some of those benefits were already in force, and the most important of them all, health care, was not included because it is forbidden by DOMA.

One gay leader invited to the Oval Office that day was Jennifer Chrisler of the Family Equality Council, an advocacy organization for gay families based in Massachusetts. She showed a photo of her 7-year-old twin sons, Tom and Tim, to Obama. The president cooed. “I told him they’re following in [the president’s daughter] Sasha’s footsteps, entering the second grade,” she recounted to me last week. “It was a very human exchange between two parents.”

Chrisler seized the moment to appeal to the president on behalf of her boys. “The worst thing you can experience as parents is to feel your children are discriminated against,” she told him. “Imagine if you have to explain every day who your parents are and that they’re as real as every family is.” Chrisler said that she and her children “want a president who will make that go away,” adding, “I believe in his heart he wants that to happen, his political mistakes notwithstanding.”

No president possesses that magic wand, but Obama’s inaction on gay civil rights is striking. So is his utterly uncharacteristic inarticulateness. The Justice Department brief defending DOMA has spoken louder for this president than any of his own words on the subject. Chrisler noted that he has given major speeches on race, on abortion and to the Muslim world. “People are waiting for that passionate speech from him on equal rights,” she said, “and the time is now.”

Action would be even better. It’s a press cliché that “gay supporters” are disappointed with Obama, but we should all be. Gay Americans aren’t just another political special interest group. They are Americans who are actively discriminated against by federal laws. If the president is to properly honor the memory of [the] Stonewall [uprising], he should get up to speed on what happened there 40 years ago, when courageous kids who had nothing, not even a public acknowledgment of their existence, stood up to make history happen in the least likely of places.

To read Frank Rich's op-ed in its entirety, click here.

For previous posts in the Wild Reed’s “Gay Pride 2009” series, see:
A Mother’s Request to President Obama: Full Equality for My Gay Son
Marriage Equality in Massachusetts: Five Years On
It Shouldn’t Matter. Except It Does: John Corvino Reflects on the Coming Out of Adam Lambert
Gay Pride as a Christian Event

For more of Frank Rich at The Wild Reed, see:
Frank Rich on the “Historic Turning Point in the Demise of America’s Anti-Gay Movement”
Holding McCain Accountable to His Falsehoods
A Rich Laugh Fit for a Dame
The Gay Old Party Comes Out

See also the related Wild Reed posts:
Dan Furmansky: “Why We Have Pride”
"We Can Make It Happen" - Senator John Marty on Marriage Equality in Minnesota
Separate is Not Equal