Who Really "Disrupted" the Pentecost Sunday Mass at the Cathedral?

Brian McNeill, president of Dignity Twin Cities and the organizer of Rainbow Sash Alliance USA, has written a thought-provoking piece in which he questions who it was that “disrupted” Sunday’s noon Pentecost Mass at the Cathedral of St. Paul.

“Was it the thirty people who quietly and prayerfully were present as gay, lesbian, bisexual, and transgender Catholics?” he asks. Or was it Archbishop Nienstedt and Fr. James Adams who “perhaps intentionally opted for the alternative reading from Galatians because it served their sectarian and political purposes . . . [among them to] discredit the wearers of the Rainbow Sash as disruptive protesters?”

Following, with his permission, is Brian’s reflection reprinted in its entirety. 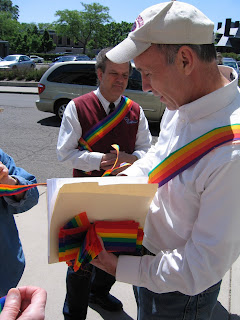 About 30 people attended the noon Mass at the Cathedral of St Paul wearing the Rainbow Sash this year. The day was warm, windy, and bright under a cloudless, blue sky. In the yards along Summit Avenue the iris were blooming, adding a luster to the glorious spring day.

After greeting one another on the sidewalk outside the Cathedral, and helping each other put on the sash, we joined the rest of the Cathedral parish community for worship. Things proceeded as usual until we hit the second reading, which was taken from Galatians 5:16-25. Having been through this Pentecost Mass at the Cathedral for the eight previous years this struck me as a little unusual. I didn’t remember that reading being used in the past for any of the Pentecost liturgies.

The presider for the Mass, Fr. James Adams, focused his homily on this reading from Galatians, which is best known for its listing of the works of the flesh: “fornication, impurity, licentiousness, idolatry, sorcery, enmities, strife, jealousy, anger, quarrels, dissensions, factions, envy, drunkenness, carousing, and things like these.” The works of the flesh are contrasted, by Paul, to the fruits of the Spirit: “love, joy, peace, patience, kindness, generosity, faithfulness, gentleness, and self-control.” Fr. Adams disarmingly made the point that anyone who reads these lists knows immediately. Neither he nor anyone is completely free of the works for the flesh, and all of us are struggling to manifest more perfectly the fruits of the Spirit. The main point of his homily was that if we work at mortifying the flesh, then we will earn the fruits of the Spirit.

The rest of the Mass proceeded in the usual way until just before the distribution of communion. At this point Fr. Adams read a prepared statement that began by noting that Eucharist is the most sacred action of the Church. He stated that those wearing the Rainbow Sash were guilty of a grave error by expressing public dissent with a central Church teaching that human sexuality can only be expressed in the context of heterosexual marriage. He then referenced the reading from Galatians, noting that dissension is a work of the flesh which Galatians condemns.

The body is one and has many members, but all the members, many though they are, are one body; and so it is with Christ. It was in one Spirit that all of us, whether Jew or Greek, slave or free, were baptized into one body. All of us have been given to drink of the one Spirit.

Over the years, in each of my letters to the Archbishop before Pentecost, when I alert him to our planned presence at the Cathedral, I am very careful to make the point that wearing the Rainbow Sash is a symbol of celebration, not protest, or, to use the word they are throwing at us today, dissent. In his answer to me this year, Archbishop Nienstedt stated, “I hope you will see how disruptive your planned protest will be for those who will gather on Pentecost to pray. I ask you to refrain from being the cause of such disruption.”

Now that Pentecost is over, I think it is fair to ask the question who disrupted the noon liturgy? Was it the thirty people who quietly and prayerfully were present as gay, lesbian, bisexual, and transgender Catholics? Or was it Archbishop Nienstedt and Fr. Adams who perhaps chose the Galatians text for the specific purpose of bearing false witness against us? Who perhaps intentionally opted for the alternative reading from Galatians because it served their sectarian and political purposes, to make their point, and discredit the wearers of the Rainbow Sash as disruptive protesters? 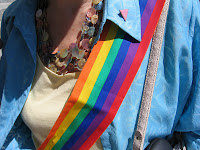 Those who wear the Rainbow Sash do so to celebrate the gift of their sexuality and the diversity of God’s creation. We thrill to the words of Paul, and almost take as our motto: “The body is one and has many members.” We all certainly do stand under the judgment pronounced in Galatians, and need conversion in some, or many, areas of our lives. If the archbishop and the cathedral officials chose the alternate reading from Galatians for the purpose of making accusations against their fellow Catholics from the altar, it would raise serious question about the intentions, judgment, and goals of the leader of the Archdiocese of St. Paul and Minneapolis.

If they chose Galatians to make a point, they’ll never admit it. But given that possibility, we must ask ourselves where would we be if Galileo, the 19th century American abolitionists, Mahatma Gandhi, and Martin Luther King Jr, not to mention Jesus of Nazareth, and the apostle Paul himself had followed the guidance given by the Church authorities in St. Paul this Pentecost from Galatians? Would most Americans be Jewish? Would India and Pakistan still be part of the British Empire? Would African Americans still be slaves? Would we still think that the sun revolves around the earth? Would Christianity ever have existed if Jesus, cowed by the warnings of the chief priests not to celebrate his vision of Abba God, never ventured forth from his carpenter’s shop? 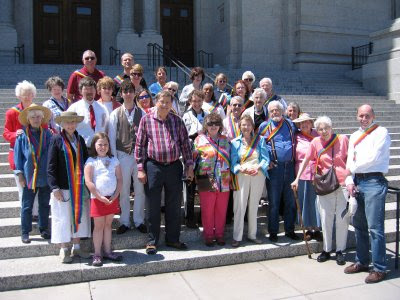 I have quoted from your post and linked to it in my own blog: http://www.theliberalspirit.com/?p=604