Keeping All the Queens Under One Roof 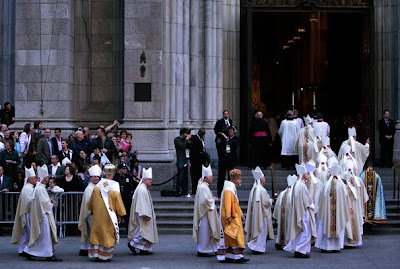 Thanks to Colleen over at Enlightened Catholicism, I’ve become aware of a commentary by Andrew Sullivan that is definitely onto something important yet rarely discussed. It also seems an appropriate post to share on the eve of that great gay holiday, Halloween!

Chris Dierkes, who has both Catholic and Anglican roots, notes an irony in the Pope’s recent actions:

If personal experience and lifelong immersion in a sub-culture is any form of persuasive evidence, I can tell you that conservative Anglo-Catholicism — at the clerical level — is totally dominated by gay men. Mostly repressed. What used to be called when I was in seminary, the pink mafia. And the thing that is the initial trigger for this decision is the upcoming very likely to happen decision to ordain women as bishops in the Church of England (there have already been women priests there for about 15 years or so). Which has a certain irony in this case. If these Anglo-Catholics join the Roman Communion they can join up with very conservative Roman Catholic groups like Regnum Christi and The Legionaries of Christ, also totally dominated by closeted gay fellows. You don’t need to be Sigmund Freud to see the awesome tragic humor in a bunch of non-wife-having grown men wearing pink dresses (and in the Pope’s case super expensive fabulous Prada shoes!!!) telling everybody else they shouldn’t be gay. 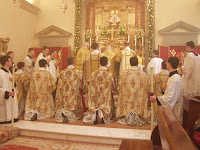 We’re not supposed to talk about this aspect of the drama in the Vatican. But there is as much an overlap of closeted gay priests and bishops with liturgical and theological orthodoxy as there is of closeted gay politicians finding ways to oppress other gays who are out and open.

Part of this is a function of generations.

If you had based your life - and sacrificed much of your emotional health – on the “intrinsic disorder” theory, you aren’t exactly happy to reverse yourself in your old age. It suggests you gave up your life for an intrinsic illogic. Part is also just mysterious. But the fact that gay men have a disproportionate talent for order and theater and detail seems pretty obvious to me. No surprise then that among the best liturgical organizers are gay men – from choirmasters to priests to altar assistants. There is something very gay about a High Mass – it’s almost the religious equivalent of a Broadway musical. So Benedict’s sisterly outreach to the closet case smells-and-bells brigade among the Anglicans makes total sense. It’s partly about keeping all the queens under one roof - and surrounded by incense and lace.

Weird, I know. But true. And I might as well admit it: I too love the old liturgies and ceremonies and drama of Catholicism. But for me, it’s not sublimation but celebration of gay men’s contribution to our churches. [Well, a certain type of gay man] One day, we’ll be able to offer our talents without having to sacrifice our integrity as human beings. One day, when all this fearful nonsense is blown away and the church can return to the Gospels and the sacraments, and gay people can be treated as, you know, the sinners that everyone else is as well. 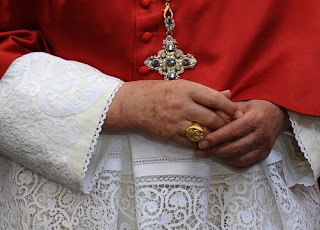 See also the previous Wild Reed posts:
Officially Homophobic, Intensely Homoerotic
Gay People and the Spiritual Life
Bless Me, Father
Homosexuality and the Priesthood
The Inherent Sensuality of Roman Catholicism
The Archangel Michael as Gay Icon
The Allure of St. Sebastian
Sergius and Bacchus: Martyrs, Saints, Lovers
The Gifts of Homosexuality
What Is It That Ails You?
A Humorous Look at Internalized Homophobia

Like any fraternity, those who already belong - and went through a certain process to get in - believe that it was so worthwhile to have suffered the hazing or the "whatever" they endured, that forever after all others must endure the same! It's a kind of Stockholm Syndrome, an identification with the aggressor, where people get brainwashed into a mindset and support it - even if it is contrary to their own deepest truth!

Something is very wrong. And rather than right it, the hierarchy would rather exclude dissent! I, for one, refuse to leave! I refuse to be silent! I refuse to marginalize my brothers and my sisters. I'm not gay. But I'm a person! And I could just as well have been born different than I am. So I can't pat myself on the back for being white or female or American or anything! Nor can I look down on anyone whose life experience or birth situation has been different from mine.

I am so irritated at the lack of charity shown by those who are supposed to "feed my sheep" - as Jesus said.

Thanks, TheraP, for your powerful words.

I will continue to follow you. For whatever reason this is one of my big issues. I hate it when people are abused or marginalized!

Honestly, it's a relief to have found a place like this!